Which ingredients are needed to absorb as many concepts for the mobility of the future as possible in the shortest time? The recipe for the Future Mobility Summit (FMS) sounds simple: take top-class guests from politics, industry and science and bring them together in a very confined space. A room in which the spirit of research ideally spills out of every brick wall – in this case the TU Berlin. However, mastering the challenges ahead will unfortunately not be as easy as these instructions. 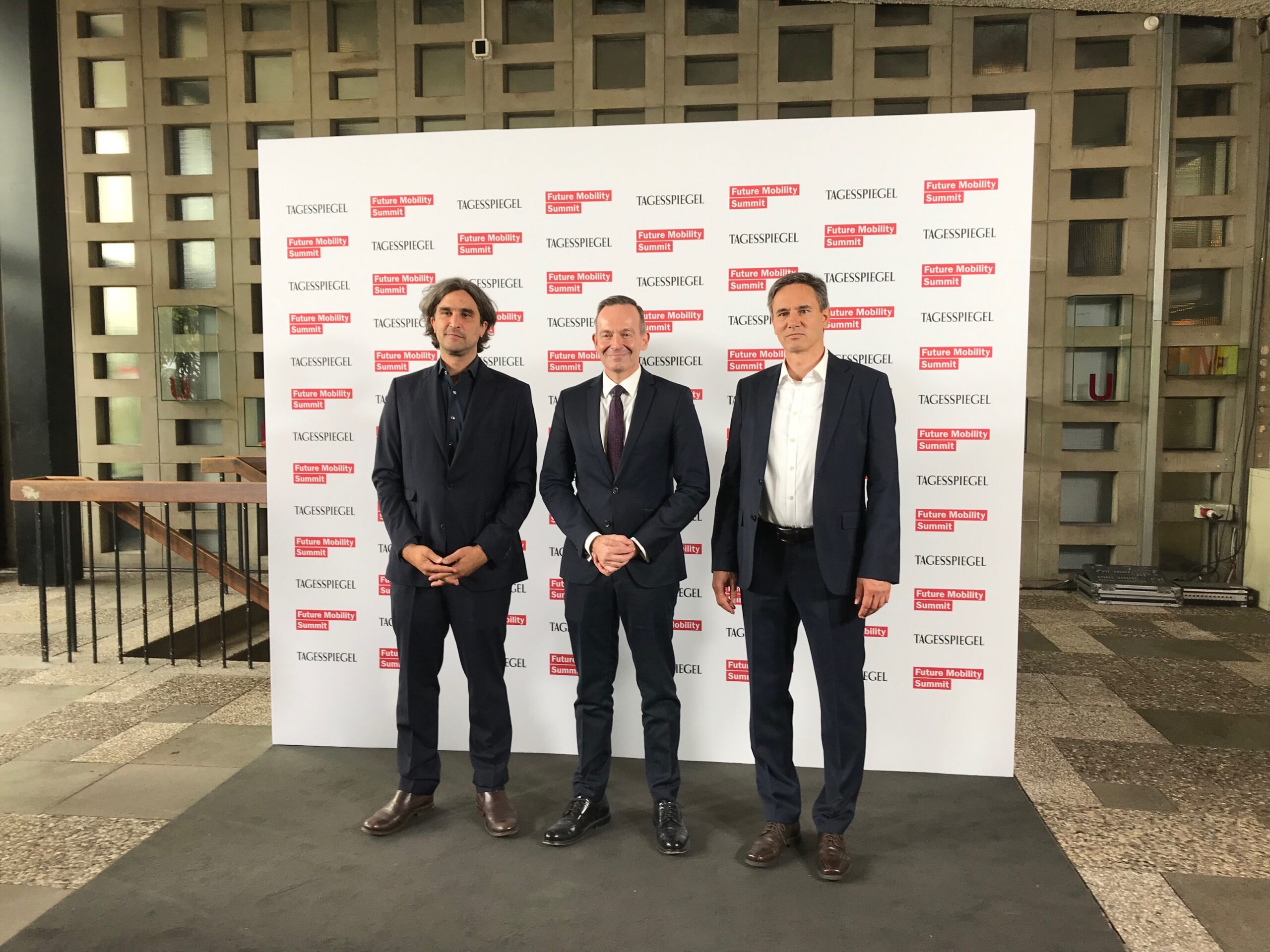 For the twelfth time, the Berlin-based Tagesspiegel newspaper hosted the FMS. This year, IAV participated as a partner in the hybrid event, which was held on the campus of the TU Berlin.
An appropriate setting, as Tagesspiegel publisher Stephan-Andreas Casdorff already pointed out in his welcome speech. On the one hand, as a spin-off of the TU Berlin, IAV has a lot in common with this location and, on the other, the well-known “do-nothing” congress (“Tunix”) was held in the same building in 1978. Doing nothing, however, was not on the agenda of the FMS, the programme was far too busy for that.

Focus often more on the present than the future

Although the FMS has the word future in its name, there was also a lot of looking back this year. The topic of the 9-euro-ticket dominated the Summit, its early demise after only three months was mourned by various panelists, and the concept was praised. The expiry of the fuel discount almost became a side issue.
Bettina Jarasch, Berlin Senator for the Environment, Mobility, Consumer and Climate Protection, was one of the first to raise the issue. “The 9-euro-ticket has shown us that an affordable public transport system for everyone is an important pillar for sustainable mobility,” said the politician from Bündnis 90/Die Grünen. A life without a private car is not wishful thinking, especially in cities, but naked common sense.
Civey founder Janina Mütze presented hard facts to the plenum, saying that the ticket had persuaded many people to use public transport more, or to use it at all. However, not only the low price but also the simplicity of the ticket was responsible for this. “With the ticket, travelers were able to bypass our complex and sometimes irritating fare system in Germany,” pointed out Deutsche Bahn’s head of digitalization, Dr. Daniela Gerd tom Markotten.
Volker Wissing (FDP), Federal Minister of Transport and Digital Infrastructure, took the same line. Ticketing alone consumes two billion euros per year in Germany. “We urgently need to establish simpler and more efficient systems here in order to be able to invest the two billion euros profitably elsewhere,” said Wissing, adding he could imagine a follow-up model to the ticket as early as January 2023. What the price tag will ultimately be is still uncertain. 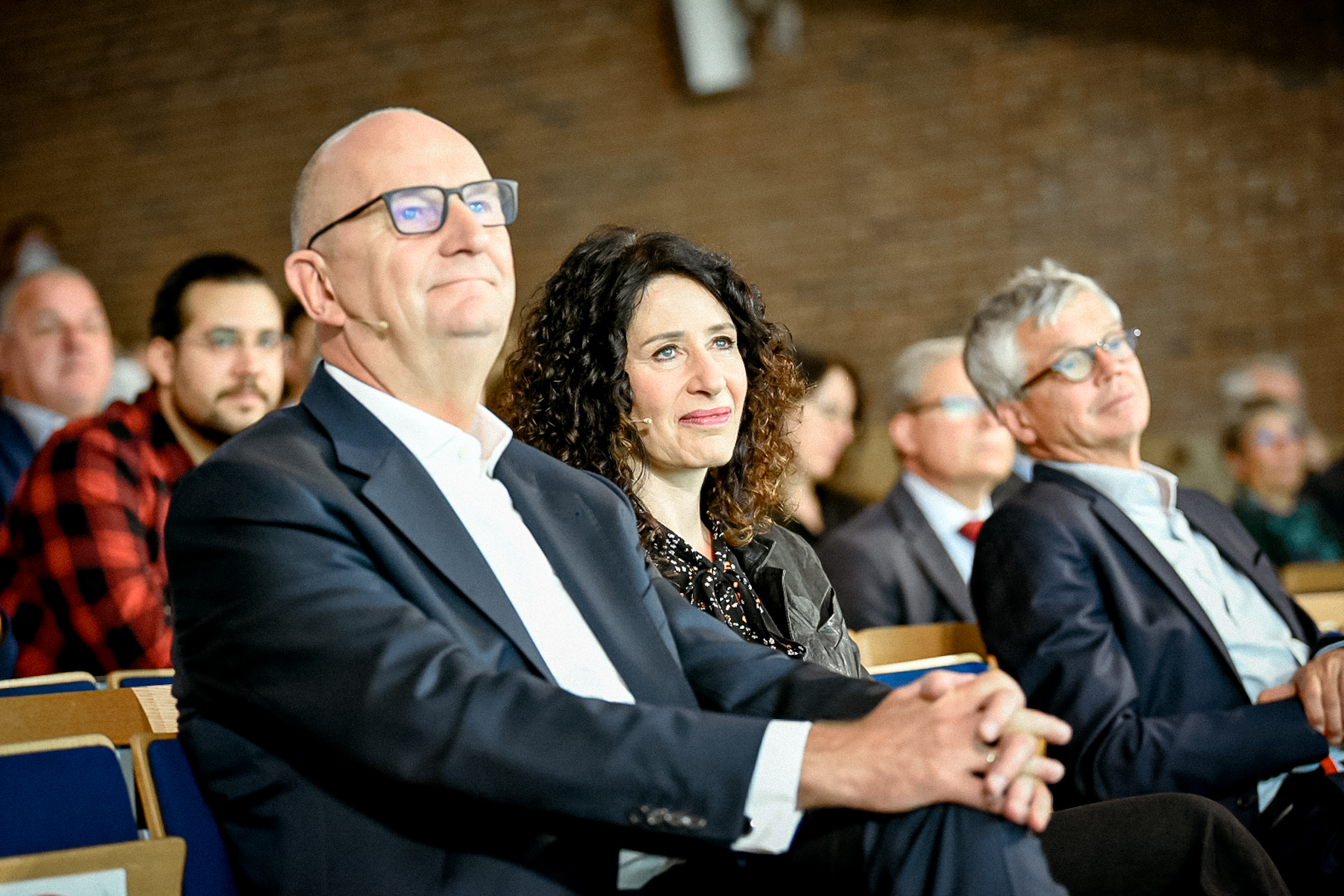 But of course, there were other topics besides the 9-euro-ticket, and the mobility decision-makers, as they were called by the Tagesspiegel, are not running out of challenges. How can Germany find its way out of the energy crisis, what role can eFuels play in the future, how can a modern charging infrastructure be established, do we produce hydrogen ourselves or is the demand in the long term only to be met by imports, how can the digitalisation of rail succeed, what tasks need to be approached in urban planning – the homework list discussed in panels, keynote speeches and mobility classes is long.

For some of these homework tasks, however, IAV already had the appropriate solution sheet in its pocket or parked on the courtyard of the TU Berlin. The “Elcty”, a sprightly double-decker bus that IAV has converted from diesel to an environmentally friendly electric vehicle, was one of the eye-catchers at the event. IAV’s autonomous shuttle “HEAT” (Hamburg Electric Autonomous Transportation) was also on display on the university grounds, offering summit guests hands-on experience of future technology. 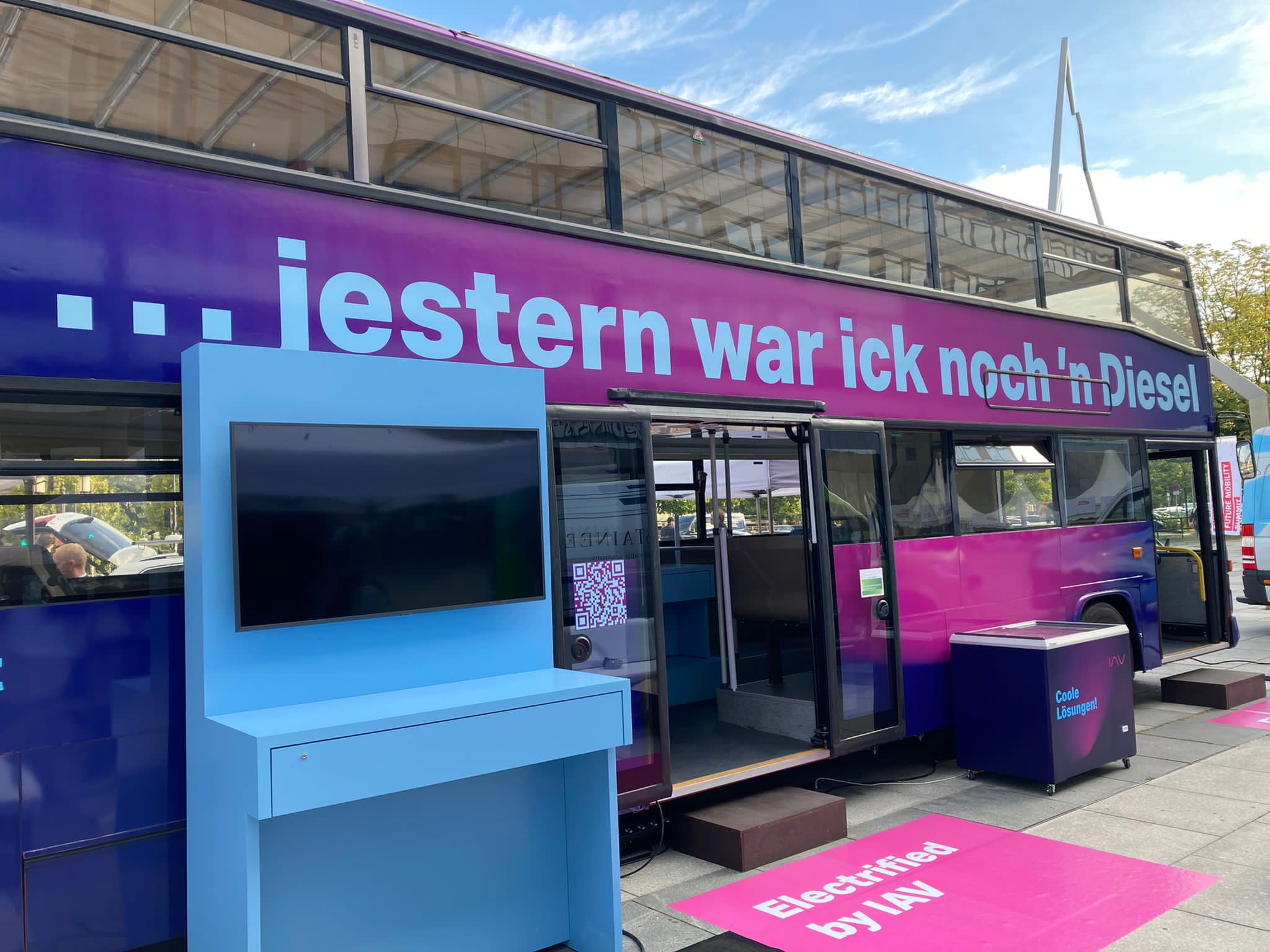 The "Elcty" bus was parked directly on the forecourt of the event location.

IAV CEO Matthias Kratzsch and other colleagues took an active part in numerous panel discussions on topics including the potential of autonomous driving, innovative software solutions and eFuels.
The highlight of the summit, however, was the pitch session at the end of the second day. Here, the focus was no longer on challenges or long-standing problems. Instead, start-ups looked ahead, encouraged the plenum and inspired with their smart business models.
Among the 18 pitches, each of which confined to three minutes length, were the “Elcty” and IAV’s “Wondervision” project. The latter is a system designed to make it easier for people with visual impairments to find their way around busy places such as train stations, underground stations or airports. The smartphone recognises signs pointing the way to the right platform and navigates the person reliably and safely to their destination via audio instructions.
In the end, the “Wondervision” team achieved an excellent second place in the closely contested audience voting. The start-up “Horyzon” from the Technical University of Munich, which wants to save lives with defibrillator-equipped life-saving drones, beat the competition by just one point. 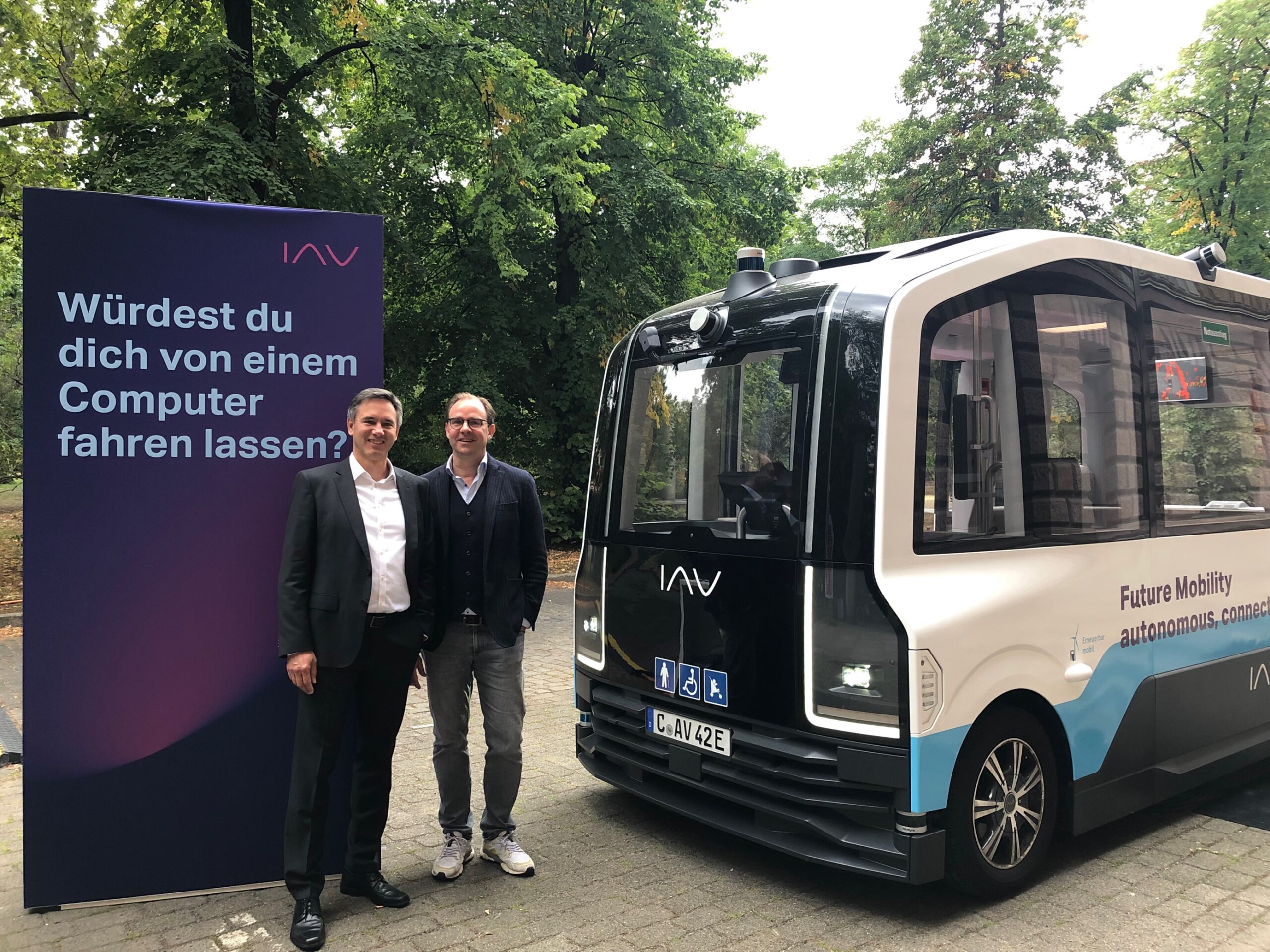 IAV CEO Matthias Kratzsch (left) and the head of the Hamburger Hochbahn discussing the potential of autonomous driving at the summit.

Conclusion: The situation is not hopeless, but exciting

What remains after two packed and interesting days at the FMS is the conclusion that the challenges in the mobility sector are diverse and glaring, but not insoluble. The technological innovation approaches and strategic considerations of politics and industry are encouraging. Dr. Alexander Joos, Senior Vice President Digital Solutions Powertrain at IAV put it in a nutshell in the panel about sustainability and resilience in research shortly before the end of the FMS: “The current crises, such as Corona, the energy and financial crisis have caused many companies and institutions to leave their comfort zones. Because of this pressure, new solutions often emerge faster, things are just done instead of spending ages mulling over possible approaches.”

After the FMS, it would be desirable if exactly that would happen. A firework of ideas and strategies were presented and discussed. Now it is time to make them a reality. 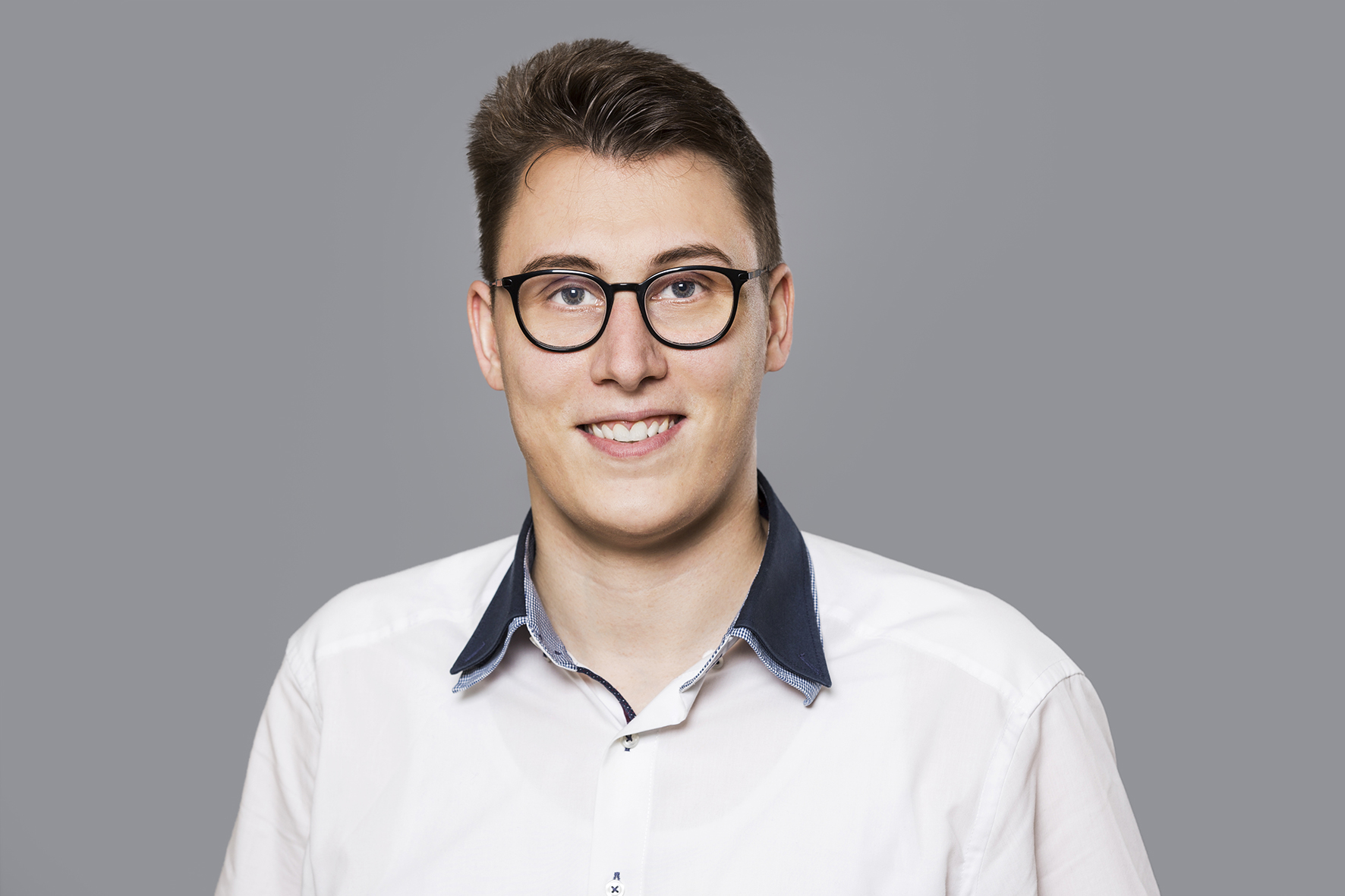