HEAT takes you autonomously through Hafencity

Berlin. The First Mayor opens the autonomous passenger service. The vehicle is now on the road on the entire route. The people of Hamburg experience HEAT before the ITS World Congress. 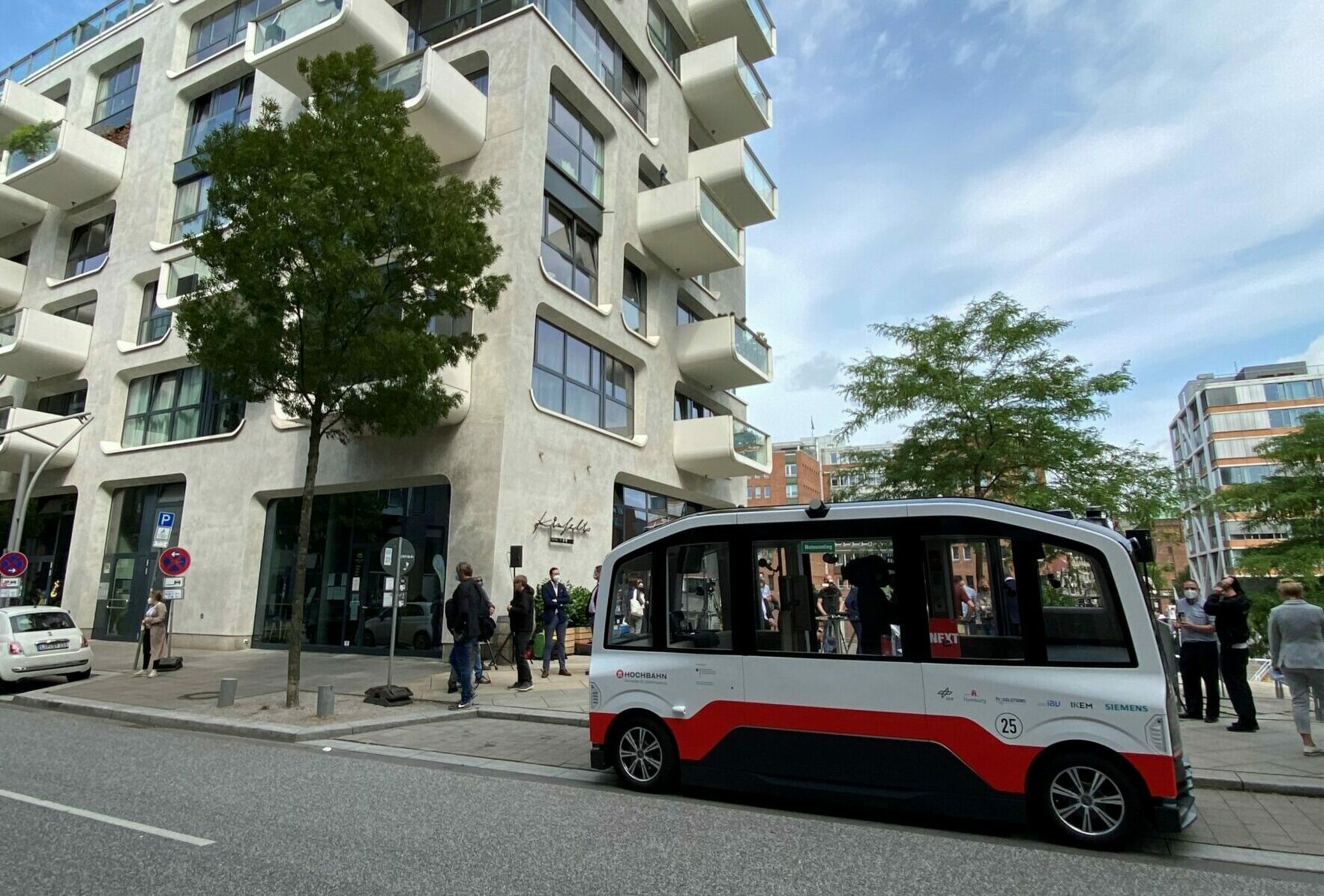 Two months before experts from all over the world come to Hamburg to take a look at the mobility of the future at the ITS World Congress, the people of Hamburg can already see it for themselves starting today. The autonomously driving minibus of the HEAT project (Hamburg Electric Autonomous Transportation) started operation with passengers in HafenCity today in the presence of the First Mayor, Dr Peter Tschentscher.

Dr Peter Tschentscher, First Mayor of the Free and Hanseatic City of Hamburg: “HEAT integrates a new technology of autonomous driving into Hamburg’s road traffic. This is a strong impulse for the development of tomorrow’s mobility. In the future, convenient and climate-friendly public transport services will be available throughout the city as an alternative to owning a car. At the same time, the HEAT project offers a preview of the ITS World Congress in October, at which Hamburg will showcase the mobility of the future: This includes autonomous driving in real operation, intelligent and interconnected traffic control on road and rail, and digital services that make our mobility easier and more convenient. I would like to thank the initiators and wish them a safe journey.”

Until the congress in mid-October, interested parties can ride in the vehicle on the almost two-kilometer circuit with five stops. At a speed of up to 25 km/h, the vehicle completes the loop from Sandtorkai via Sandtorpark and Kaiserkai along the Elbphilharmonie concert hall.
Dr Anjes Tjarks, Senator for Transport and Mobility Change: “The extended approval for passenger service on the entire route along the Elbphilharmonie is another milestone for tomorrow’s mobility. Hamburg residents can now experience autonomous driving in an electric bus in the urban environment of a major city on a total route of two kilometers. This demonstrates very well the contribution that electrically powered, autonomous minibuses could make in the future in inner-city neighborhoods, but also in the outer city, to get people to their destinations safely, conveniently and without emissions, and to connect them to the existing rapid transit network. This is unique in the world in this form and underscores Hamburg’s pioneering role throughout Germany in the field of digital sustainable mobility concepts.”

Despite the pandemic, the HEAT project has already achieved all key project goals well before the ITS World Congress. The main goal of the research and development project is to answer the question of whether autonomous minibuses are suitable and accepted for use in public transportation. The operation with passengers that is now starting rounds off the research project with the practical experience.
Henrik Falk, HOCHBAHN CEO: “With HEAT, we are the first research project in Germany in which an autonomous bus is on the road in the middle of a German metropolis under real traffic conditions and with the integration of a control center. All Hamburg residents are now invited to ride along and thus experience the mobility of tomorrow.”

«With HEAT, we succeed in safely moving a fully automated shuttle in public transport in HafenCity Hamburg. HEAT shows what the sustainable, user-oriented mobility of tomorrow could look like – a future that IAV, as a tech solution provider, is playing a key role in shaping.»

The autonomous minibus was developed by IAV, has three seats and four standing places and is equipped with a ramp for barrier-free entry and exit. Due to current hygiene regulations, up to three people can ride along at the same time. The only prerequisite for the ride remains registration via app and wearing a surgical mask.

The vehicle’s direct perception of its surroundings is based on a system of radar and lidar sensors supplemented by cameras. In addition, the vehicle accesses the innovative route infrastructure developed by Siemens Mobility and installed by Hamburg Verkehrsanlagen (HHVA). It also uses the HD map of the current route provided by the Free and Hanseatic City of Hamburg, which is accurate to within a few centimeters. The shuttle uses the information from the HD map to precisely determine its position after fusion with its own environmental data. Thanks to this interaction, the autonomous minibus can, among other things, automatically turn left, avoid obstacles, and drive at up to 25 km/h, thus blending in perfectly with the flow of traffic in HafenCity.

Manfred Fuhg, Vice President, Sales Rail Infrastructure Germany, Siemens Mobility: “Only by intelligently linking different forms of mobility will we succeed in achieving the necessary traffic turnaround in cities, the increased shift from private transport to public transport. Autonomous shuttles can play an essential role as a new attractive form of mobility. For this, we need smart transportation systems. HEAT demonstrates the contribution that linking infrastructure and vehicle data can make to system reliability. Siemens Mobility will use the findings from HEAT to further advance the vision of autonomous public transport solutions in cities.”

The use of roadside infrastructure is a special feature of the HEAT project compared to other projects with autonomous driving vehicles. It provides additional route data on vehicles, bicycle traffic and pedestrians that are outside the field of view of its sensors. This enhancement of environment perception thus immediately pays off in terms of road safety. In addition, communication between the vehicle and the infrastructure makes it possible to pass through traffic lights without any action on the part of the vehicle attendant. Thanks to the interaction of all components, the vehicle can independently view the entire intersection area, including approaching road users on foot or by bicycle, and stop and restart accordingly when turning.

With live operation with passengers, DLR’s user-centered accompanying research is also entering the decisive phase. Passengers are now being surveyed during their travel experience, as they were during the initial trial operation. Compared with the passenger journeys last year, the route length and number of stops have now reached the full expansion stage of the project. In addition, the period of passenger operation is also longer, meaning overall even more people than last year have the chance to ride the minibus and describe their experience. Another research topic is the activities in the control center.

Prof. Michael Ortgiese, Deputy Scientific Director, DLR – Institute of Transportation Systems: “Our research focuses on people and their needs and requirements in connection with new mobility systems. On the one hand, there are the users: We want to know how they experience autonomous driving and what they need to feel comfortable. On this basis, we can develop technical solution concepts for user-focused driverless operation. On the other hand, HEAT also offers an outstanding opportunity to investigate how the use of self-driving vehicles in public transport will change activities in the control center and what requirements this will place on the design of future control center workplaces.”

One of the biggest challenges in the research project remains the legal framework for autonomous driving. It was only in May of this year that the German Bundesrat, the upper house of the German parliament, approved a bill with a shortened time frame, according to which autonomous vehicles will be able to drive in specified areas of public road space without a driver in the future throughout Germany. However, this decision came too late for the HEAT project. As a result, the vehicle attendant will remain on board for safety until the ITS World Congress.
Matthias Hartwig, Team Leader Mobility, Scientific Officer, IKEM, Institut für Klimaschutz, Energie und Mobilität e.V.: “HEAT shows the possibilities and limits of the existing legal framework with regard to innovative mobility concepts. With its holistic approach, the project provides important impetus for new legislative projects on autonomous driving.”

Interested Hamburg residents can find out about the current operating times of the autonomous minibus at www.hochbahn.de/heat. The HEAT app is also available for download there, which can be used to register for a ride free of charge.