Changing the Mindset of the Entire Company

IAV tests new methods and approaches to work in the Digital Lab. Matthias Schultalbers, Chief Digital Officer at IAV, and Maike Ohmenzetter, Agile Master at IAV, report on their experiences from the first two years, the new innovation process, and the latest topics from the company’s future laboratory. 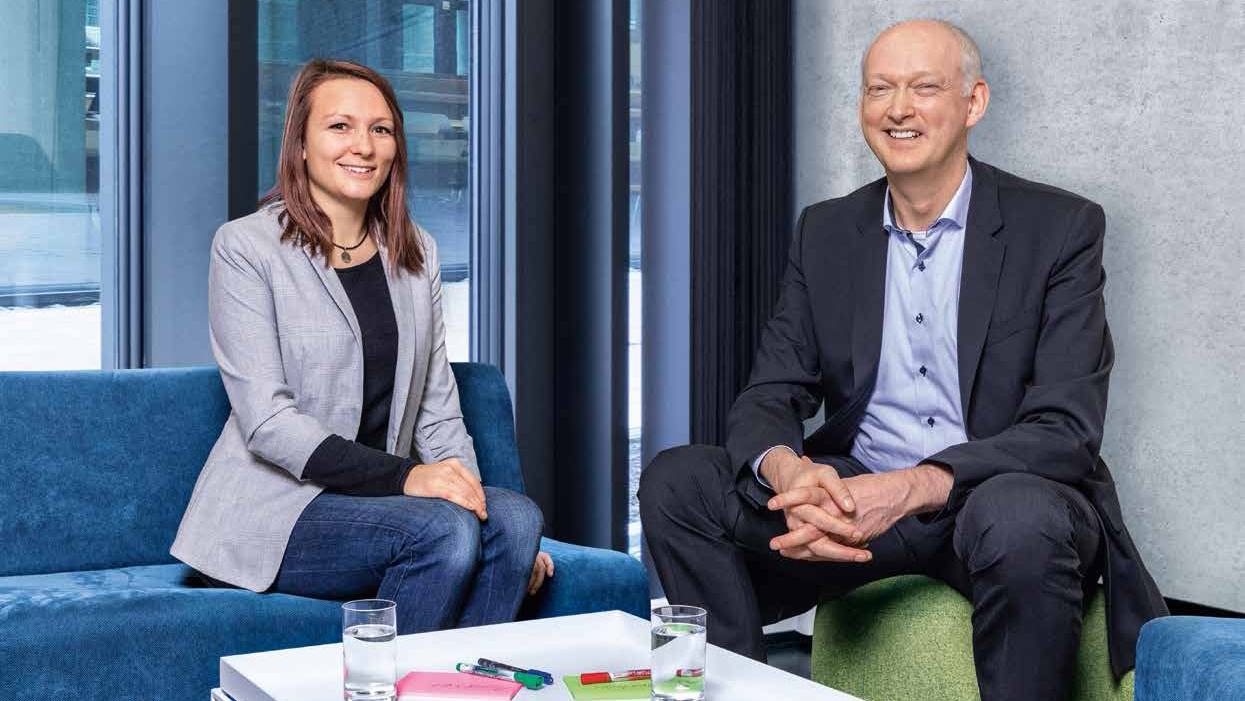 Mr. Schultalbers, you are IAV’s new CDO. What are you planning to do?

Schultalbers: I am counting on continuing to bring the latest knowledge into the company via our extensive research network. Our aim is to be familiar with the latest state of the art and to always make the latest findings accessible to all of our colleagues. At present, our business is characterized by a number of new trends and increasingly shorter development cycles, which is why we are also establishing agile working methods such as design thinking or BarCamps in the company. We are at the heart of IAV’s continued development and have already made a good deal of progress.

What role does the Digital Lab play in this?

Schultalbers: The Digital Lab serves as our platform for transporting these innovative topics and working methods into the entire company. In the operational business, it is difficult to test and evaluate new methods and processes. In the Digital Lab, we can try out new working methods but also new technologies such as artificial intelligence or the Internet of Things and harness them for all 8,000 of IAV’s employees and also for our customers, of course. We don’t just want to implement lighthouse projects; we want to change the mindset of the entire company.

»In the Digital Lab, we can try out new working methods but also new technologies such as AI or IoT and harness them for everyone – employees and customers.«

Ohmenzetter: The Digital Lab plays a key role in this. It is an open space in which we can try out new, creative approaches and in which there is also a particularly open error culture. Because one thing is certain: the world around us is becoming increasingly diverse, the challenges ever more complex. This necessitates new creative and innovation techniques. This is why colleagues from the IAV divisions come together with specialists for advanced technologies and new working methods in the Digital Lab. Experts from the domains encounter artificial intelligence or agile work experts, for instance.

How is the Digital Lab organized?

Ohmenzetter: There is a core team of around ten employees. These include the methodology experts who are familiar with artificial intelligence, data science, autonomous systems, and computer vision, for example. Other colleagues are specialized in new processes such as agile work and design thinking. Besides this core team, we always have around 20 colleagues from the IAV divisions with us; they spend three to four months in the Digital Lab to implement their ideas there.

How does an IAV employee get to work in the Digital Lab?

Ohmenzetter: Four times a year, we launch a thematic campaign and invite all IAV employees to apply to us with their ideas using an online platform. The pitch session is open to all IAV employees and always attracts around 100 spectators. These are volunteers who are interested in what’s going on – anyone can take part. Within this session, a jury decides who makes it through, so it assesses the presented ideas. The winners are then appointed as product owners and can select members for their team from among all IAV colleagues throughout the company. This is followed by a trial sprint lasting four to six weeks, a review, and the development of a ‘Minimum Viable Product’ (a minimum functional product/service) – constantly accompanied by a scrum master from the core team who coaches them.

Schultalbers: In this, it is very important to us that the technical divisions are also involved early on. As management sponsors, the Executive Vice Presidents take on the role of sparring partners for the project teams. Even during development and as soon as the ‘ Minimum Viable Product’ is available at the latest, we in the IAV management decide how we want to proceed further. We could initiate a corresponding doctoral program or start directly with acquisition, for instance.

Which campaigns are planned this year?

Ohmenzetter: One of the topics is ‘automation/digitalization’. It deals with the question of where we can automate routine tasks in administration or development in order to become more efficient and effective. Other campaigns involve the areas of ‘non-automotive’, ‘powertrain‘, and ‘ vehicle/mobility’. Interest among the staff is very high: each time, we have received far in excess of 50 proposals, ten of which were selected for the pitch. The idea presentations were attended by around 200 colleagues as spectators, either live or via Skype.

»We are in the midst of a fundamental transformation in which we are an active part with the Digital Lab.«

Many of the new methods and approaches to work come from the world of IT. Are these companies the new benchmark for IAV?

Schultalbers: Of course we are concerned with our new competitors. Besides IT companies, these also include start-ups from the digital sector. However, we won’t simply adopt everything from them, but will go our own way. Because we have a unique methodological depth and breadth compared to these companies. We are highly familiar with our domains – what we now have to do is to combine this domain knowledge with the methodological and process knowledge from the Digital Lab and integrate this combination into our series production projects. This will put us in an even better position to find optimal solutions for our customers.

Ohmenzetter: We are in the midst of a fundamental transformation in which we are an active part with the Digital Lab. It is important to us that we are not perceived as an island within the company therefore we are closely net worked with the technical depar tments. We use showcases to make digitalization tangible in practice, and we integrate it into the entire company with the aid of our network. By doing so, we take all of our colleagues along with us into the digital future.

Do you have any questions about our topic AI & Big Data?