In future, vehicle manufacturers will not be able to meet the pending CO2ﬂeet limit values without electrifying their powertrains. IAV has developed a dedicated hybrid transmission with P2 architecture that manages with fewer components and gear speeds than previous transmissions. However, it still permits a noticeable reduction in consumption and carbon emissions, using among others IAV’s systematic powertrain synthesis.

CO2 ﬂeet emissions are supposed to further decrease by 2025. Current discussions are looking among others at targets of 75 grams per kilometer. ”Greater powertrain electriﬁcation will be the only way to meet these increasingly strict emission limits“, says Dr. Jörg Müller, IAV‘s Head of Department for Hardware Development in Transmission and Hybrid Systems. ”Electriﬁed powertrains will therefore reach a very high market share by 2030.“

Developers are therefore starting to change their focus in devising new solutions. At present, attention is still on drive systems with a hybrid transmission that has been derived from the conventional version. These variants can be produced at relatively low cost by using a lot of identical parts. One frequently chosen approach is to install the electric motor at the transmission input shaft, using an additional disconnecting clutch. So called P2 architectures implement the hybrid functions as a parallel hybrid. ”These solutions will stay around on the market for a while because there is still not enough pressure for further hybridization of the vehicle ﬂeets“, explains Jens Liebold, IAV Technical Consultant for Electromechanical Drive Systems. 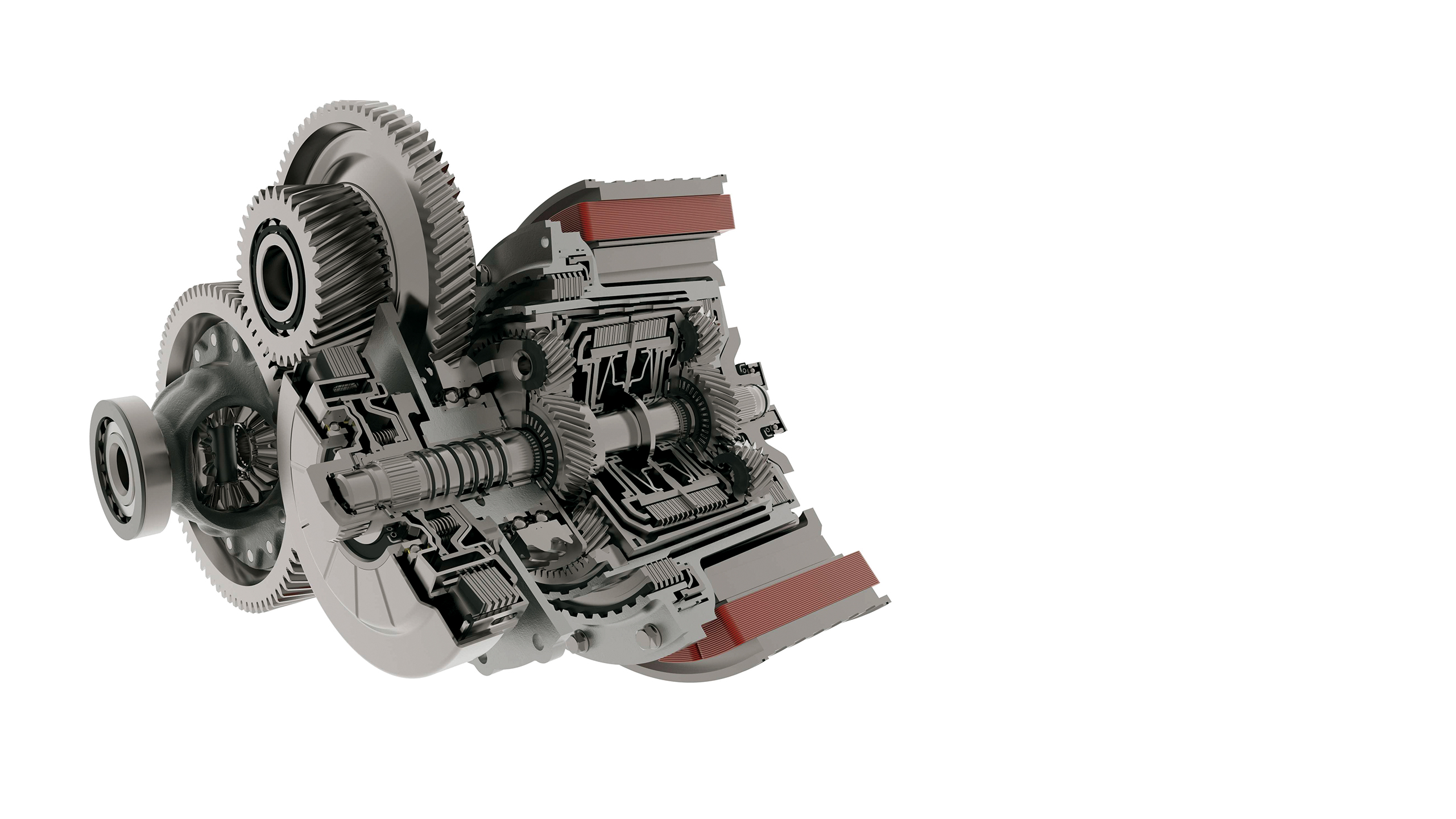 But the future belongs to dedicated hybrid transmissions (DHT) that are specially de
signed for electriﬁed powertrains and can be expected to hit the market from 2020. Economies of scale will make the derivative solutions less attractive, while DHTs constitute the better option in both technical and ﬁnancial terms. The electric motor is geometrically and functionally better integrated in the transmission with major synergy eﬀects.

The electric motor takes on new transmission functions, for example making the standard mechanical reverse gear superﬂuous. Nor will there be any further need for a separator clutch between electric motor and combustion engine. Finally, the electric motor will also eliminate starting elements in the transmission. ”DHT is a relatively new expression, but the system has been around for a while“, says Müller. ”The Toyota Prius has been volume-produced for nearly 20 years: this vehicle also has no conventional derivative without electriﬁcation.“

”We also expect there to be far fewer gear speeds“, reports Müller. ”Instead of the ten or so in current vehicles, in future there will only be three to six speeds, depending on vehicle performance.“ All in all, DHTs will be much lighter, more compact and less expensive than current hybrid systems.

IAV has examined what this kind of solution could look like in an in-house development project. The starting point was a B-segment vehicle with a weight of 1.4 tons, a 213 kW twoliter turbo gasoline engine and maximum torque of 400 Newton meters. The powertrain is designed as a front-transverse engine with a four-wheel drive option. Other objectives include acceleration from 0 to 100 km/h in under four seconds in hybrid mode and less than ten seconds in purely electric mode. The battery with a capacity of 12 kilowatt hours should permit a purely electric range of 60 kilometers. And it goes without saying that the development engineers were also aiming for a clear reduction in fuel consumption.

Search for an optimum across all systems

The growing complexity of powertrains is forcing developers to focus more and more on the interdependencies between the individual components in order to ﬁnd a cross-system optimum for each speciﬁc application – which is where IAV’s powertrain synthesis comes in used in advance and concept development. This development method generates, analyzes and evaluates all technically feasible powertrain conﬁgurations. ”Every powertrain is based on parameters and maps for combustion engine, transmission, electric motor with power electronics, energy storage and vehicle“, says Liebold. ”Powertrain synthesis examines all possible combinations, taking account of drive topology, operating strategy and driving cycles in terms of emissions, performance and system costs.“ The ﬁnal result consists in a ranking of the best conﬁgurations.

In this speciﬁc case, there were 5.1 million different powertrain conﬁgurations. According to the speciﬁcations for developers, the new DHT was to have four speeds and electric output of 90 kilowatt at maximum torque of 250 to 300 Newton meters. This resulted in values of between ten and twelve for the starting ratio with spreads of between four and ﬁve in the gear set.

Transmission and electric motor synthesis for the technical details

These requirements were then the input values for subsequent transmission synthesis, where the developers restricted their focus to planetary automatic transmissions with two planetary gear sets and four or ﬁve gearshift elements, resulting in around 475,000 possible solutions. The most suitable variant is a transmission with four gearshift elements, stationary ratios of -2.1 in each case, a starting ratio of approx. 11 and a spread of 4.6. The boundary conditions from the powertrain synthesis were also used for synthesis of the electric motor. Here the developers had to choose from 4,372 technically feasible solutions. A high-performance computer cluster also helped, and know-how of course.

The end result consisted in a compact DHT for input torques of up to 700 Newton meters and input speeds of up to 7,000 rpm for highperformance vehicles. The electric motor is altogether 130 mm long, while the entire transmission is 360 mm long and weighs just under 110 kilogram. Simulations show that fuel consumption in such a vehicle would be around four liters per 100 kilometers – around half the consumption of a conventionally propelled car in this category.