Automotive electronics are merging with corporate IT and consumer electronics

In the future, the classic criteria for buying a vehicle may possibly no longer play a crucial role for individuals. Instead, vehicles will become rolling devices that are defined through software-based functions and add-ons. The know-how required to develop these systems combines corporate IT and consumer electronics with classic automotive electronics. IAV managers Jean Wagner-Douglas and Martin Richter explain how this interaction works.

Automotive manufacturers want to develop more software themselves in the future. Is that good or bad news for IAV?

Wagner-Douglas: Good news. We will be involved in it to the same extent as we were in developing electronics and software in the past.

Richter: ‘Do-it-yourself’ primarily means that software has been recognized as absolutely critical to success. And the statement represents the effort to think the topic through from the very beginning. Many manufacturers will be unable to undertake these tasks alone due to various factors such as the shortage of skilled workers and increasingly faster development cycles. This is where we come into play in supporting the OEMs with our end-to-end expertise.

We are the partner that has in-depth knowledge in all areas, from system architecture and all IoT elements up to and including the definition of connectivity. In this, we assume responsibility for complex software development, subsequent integration, and validation.

What type of software are we actually talking about here?

Wagner-Douglas: So far, the software in vehicles has been characterized by embedded systems, as in the air conditioning or drive control systems, for instance. More and more connectivity services are being added due to the increase in networking in and around the vehicle. This necessitates seamless interaction between the software in the vehicle, in the back-end, and on mobile devices. We are shifting towards a world in which software updates or new apps for the car will be as common as for a smartphone.

Richter: In the future, the vehicle will be embedded in a complete mobility ecosystem. This will result in new services for users that will, of course, also give rise to new requirements. At the same time, integration into new operating models such as car and ride sharing, for example, will also play a role.

But classic software on embedded systems will still be around as well, won’t it?

Wagner-Douglas: When you take a look in a car, a distinction is classically made between safety-relevant systems such as those in the suspension and services for entertaining the occupants, for instance.

Richter: The basic function surrounding driving will continue to be implemented as an embedded function on Classic AUTOSAR. The interaction with serviceoriented structures, for example based on Adaptive AUTOSAR or Linux directly, then ensures an integration into the IoT world.

»We are shifting towards a world in which software updates or new apps for the car will be as common as for a smartphone.«

Will powerful servers remotely control the entire vehicle in the future?

Wagner-Douglas: That will be a well conceivable scenario for completely autonomous vehicles. To achieve that, you require a highly available data transfer bandwidth which will almost certainly not be available everywhere even in five years. We are already seeing this shift increasingly often in partial areas that do not access driving functions. If we look at the chassis, adaptation to the road conditions is worth mentioning. The next step would be for the vehicle to independently download a data record with which it can perfectly cross a specific alpine pass. This example shows that comfort functions and safety-relevant functions can no longer be completely separated. Nevertheless, certain amounts of intelligence will remain directly in the vehicle in the future. This is necessary, particularly to ensure the safety of the vehicle occupants even when connectivity is not unreservedly available.

To what extent will vehicles be characterized by the manufacturerspecific operating system in the future?

Richter: Electromobility, autonomous driving, and connectivity are changing vehicles fundamentally. Softwarebased systems enable the automotive manufacturers to keep this development in their own hands – and by no means least to safeguard their added value. Just think of operating systems from the world of classic software. The differences between Apple and Windows are conscious product decisions that are market-relevant. The operating systems actively influence the user experience and thus influence purchase decisions and brand loyalty.

Is added value shifting from hardware to software?

Wagner-Douglas: Definitely, yes. Here too, the chassis can serve as a good example. Instead of steering linkage, the car is driven using ‘steer-by-wire’.

Richter: Added to this is the trend towards distributing the processing power in the vehicle among significantly fewer control units. Some of these are high-performance computers on which software from several dozens of suppliers is implemented. 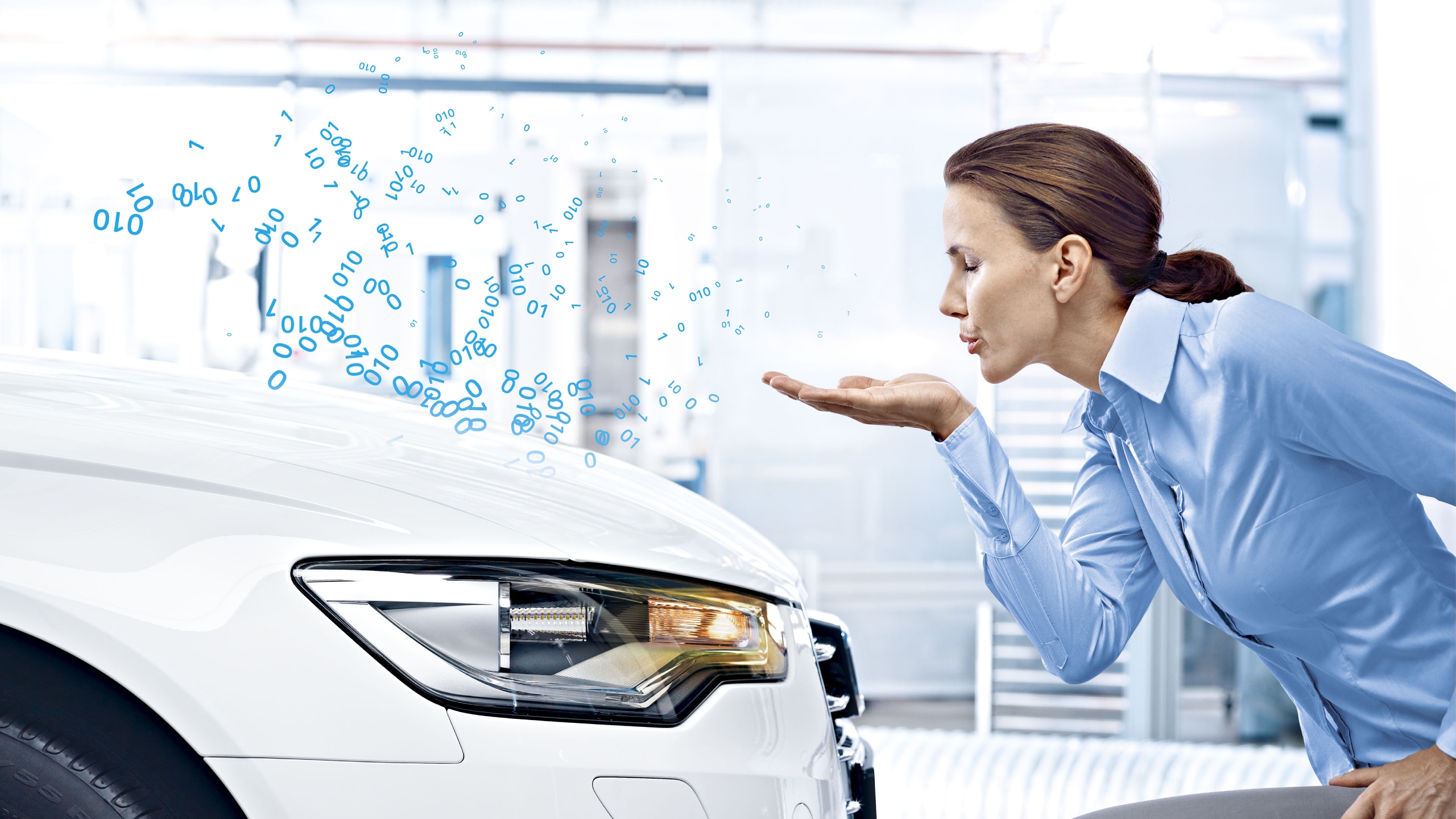 And does that work?

Richter: Yes, but only if the architecture was properly thought through beforehand and there is a development platform that supports this mammoth task.

Wagner-Douglas: It is important to take a holistic approach to the software structures. That is precisely what our new Connected Software Systems & Services business unit does at IAV.

Wagner-Douglas: Of course, IAV is continuing to develop in domain-specific units such as the drive or chassis. In this regard, software is still represented throughout the entire company as a basic competence. In total, we’re talking about over 3,000 software developers and software-related specialists. Thanks to the new structure with a central software unit, in which we have brought 800 of these specialists together, we are establishing a cross-sectional function for all of these topics at IAV. We are also combining the know-how from the embedded world with the topics of the IT world. This enables us to pursue a holistic architectural approach across various areas such as vehicles, back-end, and mobile devices. In this way we can effectively address new topics such as data analysis and cloud applications.

Richter: Our teams are structured accordingly so that we can also implement this in practice. For instance, experts from both worlds work together depending on project requirements. At the same time, we are developing the software unit as an internal service provider so that all other divisions receive the specialist support they need at all times.

How well does the cooperation between these worlds function?

Wagner- Douglas: Just six months after setting up our new division, there are still some points at which not everything is running absolutely smoothly, of course. After all, we’re talking about some 1,000 colleagues who have to regroup. We are using the agile principles as orientation to offer all of them an optimal basis in their daily routine and to foster collaboration. At the same time, we benefit from this working method by being able to respond more flexibly to increasingly faster development cycles and individual requirements.

»In the future, the vehicle will be embedded in a complete mobility ecosystem.«

Is that possible without any loss of quality?

Wagner-Douglas:It is a myth that agile work leads to lower quality. The opposite is the case. We have been practicing agile work in some teams for a number of years and have noticed that mistakes are discovered much more quickly. The reason being that all process stages are run through in every sprint, just in small steps. The team members also push each other in a positive sense so that they are finished on time. If the method is applied correctly, the work is much more structured than in a classic, cascading project organization – although a classic approach is certainly sensible for specific topics and has by no means become obsolete.

Richter: To transfer agile practices to our software engineering routine, we have implemented an agile project landscape that we call ‘AgiPro’. What’s special about this is that we can combine agile working methods with various tools from embedded and IT development to comply with the Automotive SPICE standards.

Where do all of these IT specialists come from?

Wagner-Douglas: We have recruited a lot of new colleagues to cope with this growth. We also rely on a role-based qualification program at IAV. This means that we offer various training options – online, in-house, and also externally – to enable continuous further development at the very highest level.

Richter: We are also taking new approaches to recruiting by participating in pitch nights, for example. We have also been working intensively together with universities for many years and will continue to rely on such strong partnerships. Above all, many top talents find IAV so exciting because it is possible to shoulder responsibility early on and to work on a very wide range of topics.

Wagner-Douglas: Of course, relying solely on the new and the young all the time doesn’t work either. It is crucial to have the right mix of newcomers and experienced developers on board to work together on new ideas for our customers.

The interview was conducted by Johannes Winterhagen.

Do you have any questions about our topic Software & Apps?