EMBATT technology has reached an important milestone: several functional samples made up of ten cells perform well. In the next step, IAV’s experts are examining new transmission and electrode materials which are less expensive and more sustainable.

EMBATT has an ambitious goal: in cooperation with partners from industry and science, IAV is working on the technology to double the energy density of traction batteries from around 250 Watt hours per liter (Wh/l) at present to 500 Wh/l. At the same time, the production costs at battery system level are to fall to well below 200 € per kilowatt hour. This could end in affordable electric traveling ranges of over 500 kilometers – a real breakthrough for electric mobility where range and costs are still critical factors. The project reached an important milestone at the end of 2017: As planned, functional samples consisting of ten bipolar-stacked cells in a format of 200 times 300 millimeters deliver a voltage of 30 volts and have already completed 100 charging cycles. For the most part; they were constructed by IAV: “Among other activities, we trimmed, stacked and sealed the electrodes which came from our project partners”, reports Michael Clauß, EMBATT project manager at IAV. “We also fitted the contacts and added the electrolyte.”

Successful testing on the initial functional samples delivered important points of reference for the other project partners. “Developing the facilities for EMBATT still leaves many questions unanswered”, Clauß says. “We are using our findings from advance development to help the colleagues working on materials and production.” The functional samples also provide the first EMBATT hardware that can be shown in customer presentations. 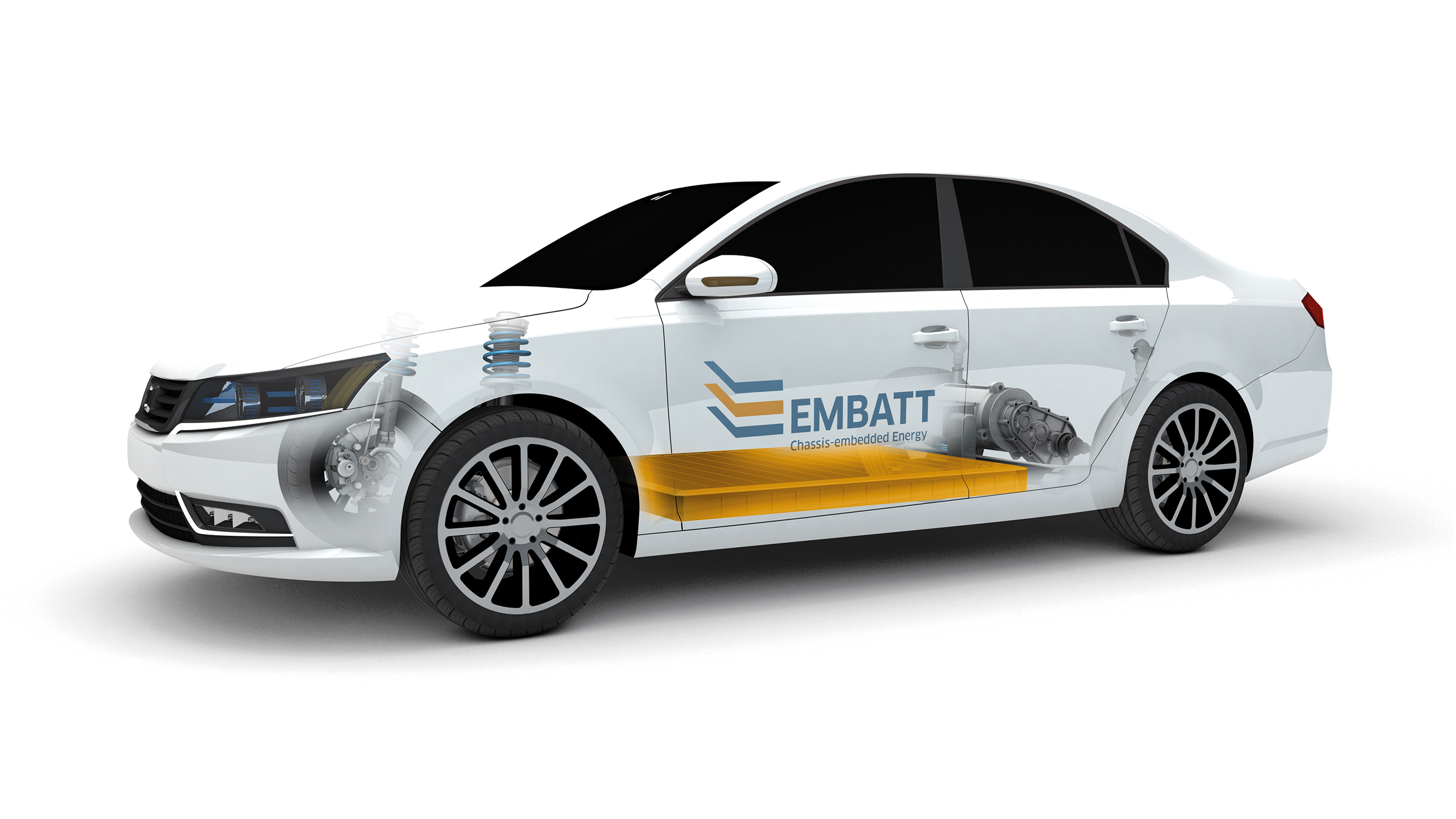 New materials for electrodes and conductors

By the end of the year, IAV will construct further functional samples consisting of up to 14 cells in a format of 300 times 400 millimeters. Improvements are also to be made to the battery cells. Instead of lithium titanate (Li4Ti5O12) as the electrode material currently used for the anode and lithium nickel manganese oxide (LiNi0.5Mn1.5O4) for the cathode, it is planned to use graphite and lithium nickel 14 Topic focus | automotion manganese cobalt oxide (LiNixMnyCozO2). The energy density of graphite (372 mAh per gram) is more than twice that of LTO (170 mAh per gram). Under the aspects of cost and sustainability, graphite-NMC is a better combination than LTO-LNMO (also see article on page 16). “This is because of the high amount of energy needed to produce the LTO and LNMO ceramic materials and the large quantity of CO2 this generates”, Clauß says. In contrast, graphite is readily available. The share of cobalt in NMC is only around ten percent and is to be further reduced. Hence, the life cycle assessment clearly speaks in favor of this new option.”

This does, however, mean that the engineers will have to use a new conductor material which enables the graphite or NMC electrodes to be applied on both sides. “Aluminum, which has been used so far, is not suitable for this purpose as it reacts with graphite”, explains Clauß. “This is why we are working on a combination of copper as the substrate for the graphite and aluminum as the substrate for NMC.” As soon as the initial cells are available with the new materials (which is expected before the end of 2018), extensive testing will be on the agenda, including tests on cell structure and cell safety. This still leaves the question of how to produce the copper-aluminum combination on a large industrial scale.

The first volume application for EMBATT is planned for 2025, and an initial large-area functional sample (1000 x 300 millimeters) is to be available with the new technology as early as 2021. IAV’s customers are benefiting from the project even today because work on EMBATT is bringing together many of IAV’s divisions, such as experts in technology evaluation, design, simulation and testing. “We have been able to build broad knowledge on developing battery systems which will go in to future client projects”, Clauß reports. “This will enable us to assess other technologies in detail, such as new concepts for round cells in traction batteries.”

Besides IAV, the Fraunhofer Institute for Ceramic Technologies and Systems (IKTS) and thyssenkrupp System Engineering are also involved in EMBATT. The technology is being funded by the European Union (ERDF) and Germany’s Federal Ministry of Education and Research.

At the core of the EMBATT approach is a design principle that is already established for fuel cells and is now being applied to lithium-ion batteries. It is based on large-area electrodes stacked in a bipolar structure. The EMBATT bipolar battery consists of cells which are stacked in such a manner that the arrester of the negative electrode of a cell provides contacting for the positive electrode of the next cell. Thus, two electrochemical cells are connected in series – the one side of the bipolar electrode serves as an anode in one cell and the other side as a cathode in the next cell. The larger and thicker the electrodes are, the higher the capacity of the battery.

This stack structure provides a variable system voltage as well as outstanding performance parameters. Integrated directly into the chassis of a vehicle, the structure of the EMBATT bipolar battery with its reduced system complexity and use of modern active materials makes it possible to carry significantly more electric energy on board. A key to this is the battery’s stack structure of large- area bipolar electrodes that allows more active storage material to be integrated into a battery system. This means that electric vehicles with a range of over 500 kilometers could soon be part of everyday road traffic.