IAV “We are Broadening Our IT Expertise“

“We are Broadening Our IT Expertise“

Connectivity and digitization are two central trends in automotive engineering. At the Consumer Electronics Show (CES) in Las Vegas, IAV presented actual use cases to demonstrate what the future holds in store – from context-based illumination of the vehicle interior to the remote-controlled vehicle. Jean Wagner-Douglas, Executive Vice President for Vehicle Dynamics at IAV, speaks in the automotion interview about the vision of digital mobility and about the new services that will be making their way into volume production in a few years’ time.

Mr. Wagner-Douglas, IAV’s presentation at CES stood under the motto “A Journey towards Digital Mobility”. What did you show on this subject in Las Vegas?

Wagner-Douglas: Basically, it is about vehicles becoming more and more connected with the digital world and the unique opportunities this will produce for us and our partners. In future, cars will be permanently connected with the Internet, i.e. “always on”. Mobile devices, such as smartphones or wearables, will communicate with the vehicle which, for its part, will exchange data with the cloud, providing the basis for completely new services – incidentally, it is also one of the keys to autonomous driving. This is what this development means for us: we will continue to broaden our IT expertise and work even more closely with partners, like Microsoft and Hewlett-Packard.

CES visitors to our booth were able to see some of the results of this cooperation. We showed them our Cloud Car, a Seat LEON Cupra, which we fitted with two additional control units and a security gateway. It is connected to external devices by Bluetooth and Wi-Fi and via LTE with a cloud operated by Hewlett-Packard. On the basis of actual use cases, we use this vehicle to present our vision of digital mobility. In other words: we invite visitors to embark on a journey towards the future of digital mobility.

Please name a few examples for us.

We have integrated a “remote control” function into the Cloud Car, for example. It permits remote access to steering and brakes, allowing the car to be controlled from outside via the cloud with a tablet PC. This could be used to maneuver a vehicle into a particularly tight parking space. Show visitors had the opportunity to try out this remote control for themselves on our booth at CES. This use case is also designed to help people prepare for autonomous driving in the future.

Another interesting application is “remote diagnostics”. Even today, test vehicles send current data from fleet tests to our computing centers via the cloud. In future, broken-down production vehicles could also get in direct contact with a service center to diagnose problems and, if necessary, organize assistance or update software. In Las Vegas, we showed a “general inspection pre-check” that identifies and indicates problems in the vehicle. In future, predictive diagnostics could make breakdowns a much less daunting prospect because the car would notice an imminent failure in advance. This could completely avoid unexpected problems and minimize inconvenience. 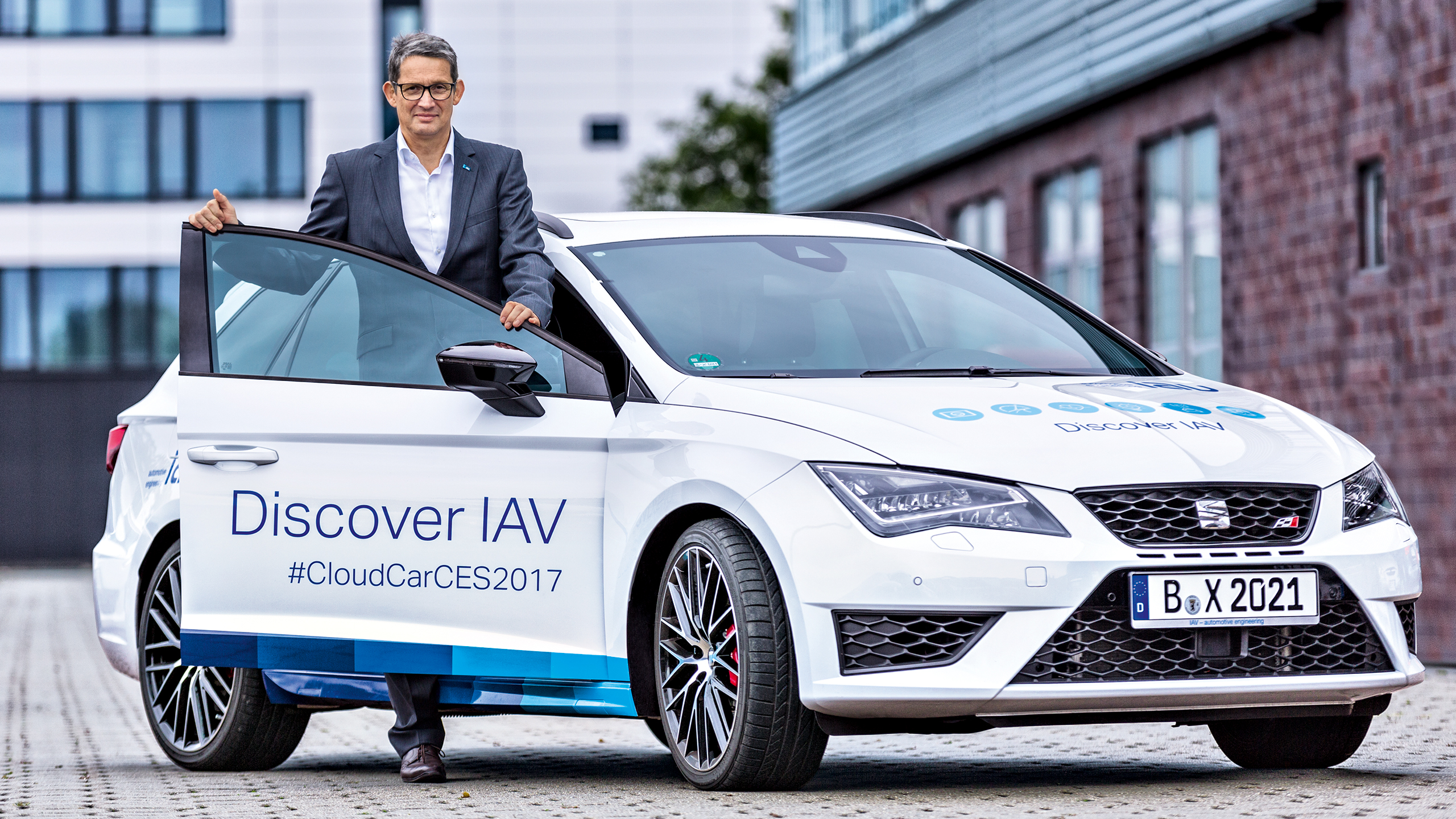 What part does connectivity with consumer devices play?

This is an important aspect and by no means a trivial matter – after all, we must ensure that CE devices are securely connected to the vehicle buses. In Las Vegas we showed how biometric sensors – in this case wearables – can be connected to the car via Bluetooth to collect physiological data from the driver and respond to them. This way, the vehicle can adapt to its occupants by adjusting the air-conditioning, seat position or infotainment to suit their current condition. Our Cloud Car is equipped with context-based illumination that varies lighting in the passenger compartment to calm the driver down in stress situations, for instance.

In this context, I would also like to mention the “Secure Demonstrator”. Many use cases of the future will use personal data which is why we attach huge importance to confidentiality and data integrity. In Las Vegas we showed visitors how we will provide their data with the best possible protection by using modern security concepts, such as encryption and firewalls.

Which other perspectives toward digital mobility did you show at CES?

The Cloud Car also comes with a virtual co-pilot, comparable with an assistant in rally sport where the co-driver constantly provides the pilot with information on optimum gear speed or upcoming bends. We have implemented this principle in a digital assistant which, like a virtual co-driver, assists novice drivers in road traffic. It tells them, for instance, if they are in the wrong gear or approaching a bend too fast.

The Cloud Car also has its own Twitter account, #CloudCarCES2017, which let show visitors communicate with it. For example, it recognized visitors who had contacted it before and greeted them with a flash of the headlights.

What’s behind the photo album you showed in Las Vegas?

Anyone going on a journey naturally wants as many photos as possible as mementos. In future, a driver could press “Photo Album” on the infotainment system’s monitor along the route and, on the basis of GPS data, photos and facts on the itinerary’s highlights could then be filed in the cloud. At CES, we had a test track that let visitors go on a little “trip” through the USA. They drove past signs showing them pictures of Las Vegas, Los Angeles, San Francisco, Detroit and New York. Afterwards, we mailed them a photo album with pictures of and background information on the locations they had “visited” – reminding them later on of their journey towards digital mobility.

Mr. Wagner-Douglas, many thanks for talking to us.