Rimac and IAV team up on E-Hypercar project

Berlin/Zagreb. Technology company and hypercar manufacturer Rimac Automobili and the Berlin based engineering specialist IAV are cooperating on the final stages of development of the C_Two electric super sports car: At its test center in Stollberg, IAV is testing the heart of the new vehicle, the almost 2.000 HP Rimac electric drive, alongside other components. Together with the testing service provider SLG Prüf- und Zertifizierungs GmbH, IAV is also determining the components’ reaction to extreme temperatures and their electromagnetic compatibility – all important steps for Rimac in order to achieve readiness for series production in 2021 and certification of the electric super sports car in a timely manner. 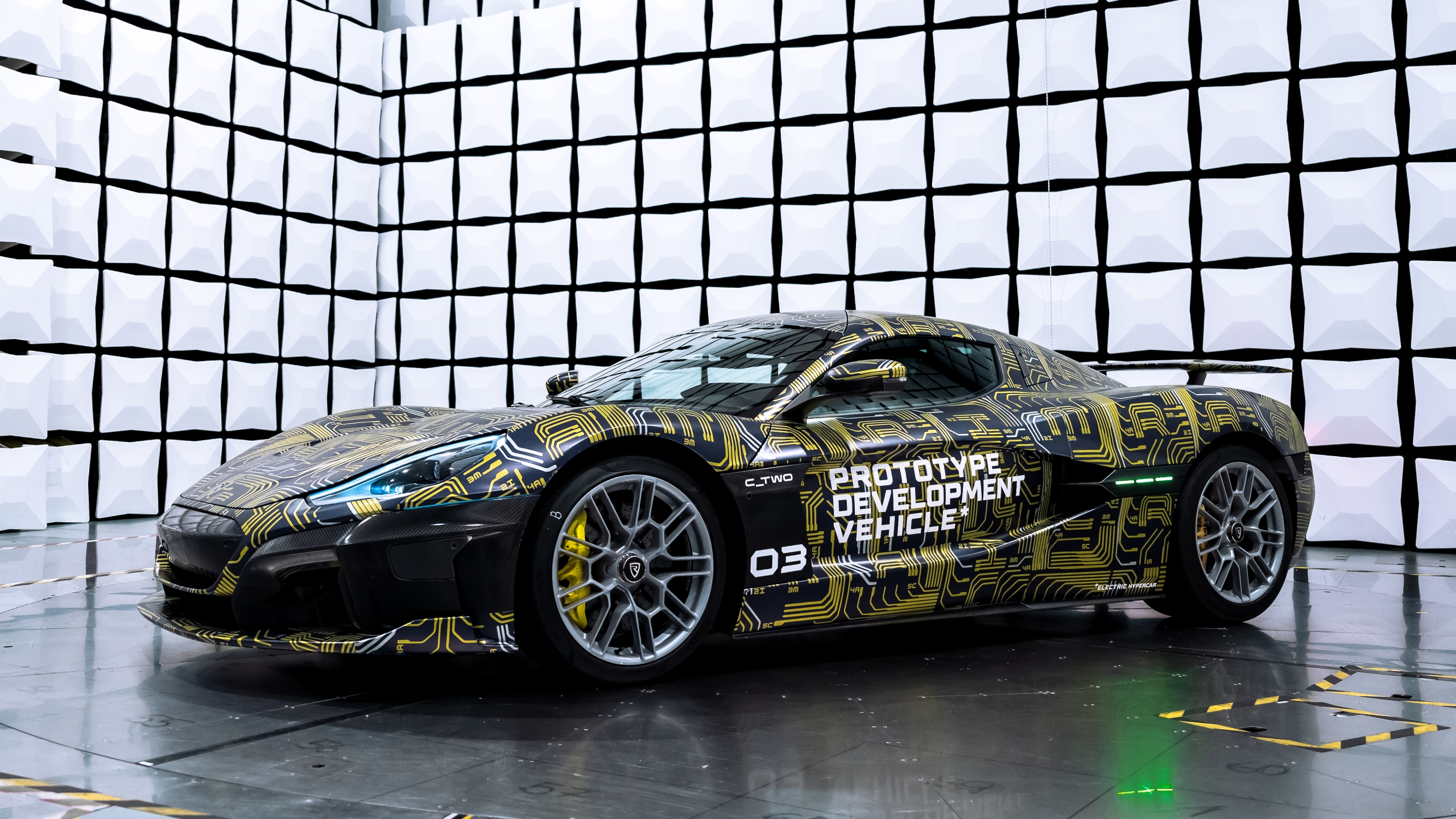 A top speed of 412 km/h (258 mph), a powertrain torque of 2,300 Nm and acceleration from 0 to 100 km/h in less than 2 seconds: With these stunning performance figures, the C_Two, the second model from the Croatian electric sports car manufacturer Rimac, is to be delivered as early as next year. For Rimac engineers, the extreme power of the Rimac-developed drive system means working at the utmost limits – especially when, at the end of the development process, the aim is to make the leap into series production of globally homologated hypercar and guarantee that all components function reliably and smoothly in continuous use. IAV provides valuable support in this final phase: The Berlin-based company is cooperating with Rimac on testing the C_Two’s electric drivetrains and advising Rimac on the final development of the relevant components.

Chris Porritt, CTO, Rimac Automobili, says: “We are working hard to shape this car exactly how we imagined it: a new breed of hypercar that unlocks the extreme performance and new driving experience. At the same time, it will be a technical masterpiece from an engineering point of view. So it is essential to us, given its performance that everything works seamlessly. As a result, we are pleased to be working with specialists such as IAV on testing and fine-tuning in the final stages development.”

«At Rimac, we proud ourselves in precision development and advanced engineering.»

Erik Schneider, Senior Vice President of E-Traction & Hybrid Systems Department at IAV, says: “Rimac has achieved an impressive market position within a few years. The depth of production and development at Rimac is impressive. We are all the more pleased to be able to support Rimac as a specialist for electric sports cars with our expertise in near-series development and associated testing.”

During the tests, IAV focuses on the 600 and 1.000 kW drive units on the front and rear axles – developed and manufactured by Rimac. They each consist of two electric machines, two transmissions and an inverter. IAV puts these components to the test bench in order to identify any uncertainty factors and technical faults and to analyze and rectify them together with Rimac. In doing so, IAV draws on experience in measurements in the limit value range from well-known sports car projects. 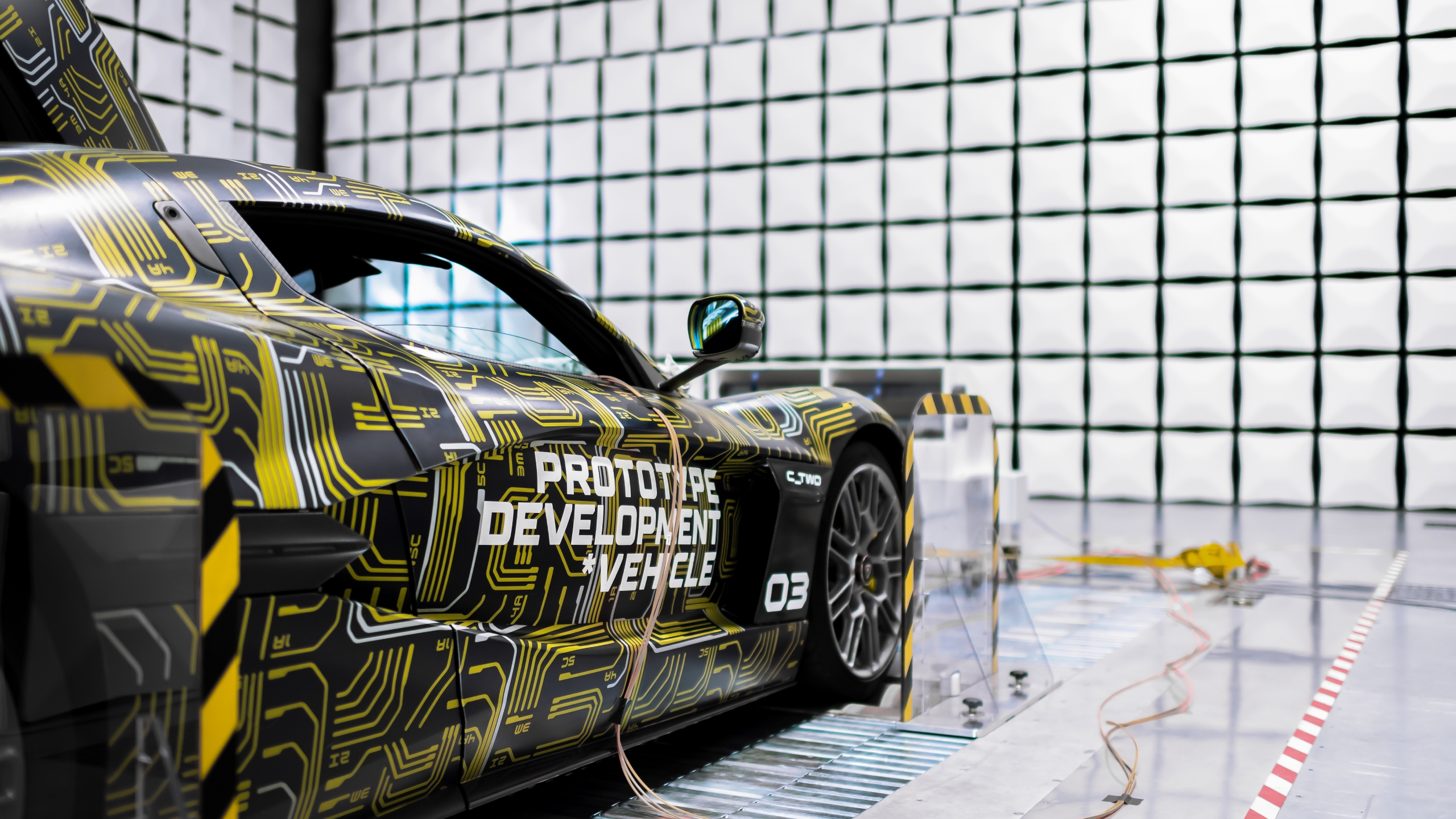 “The high performance of the drive system is unique. It means an endurance test not only for the components but also for our test benches, which must operate at up to 1 MW of power”, says department head Schneider. “The test bench infrastructure in Stollberg allows us to test the components repeatedly under laboratory conditions with reliable and reproducible test parameters. In this way, we can specifically search for weak points and eliminate them in the final development steps with Rimac.”

Besides, IAV and SLG are responsible for environmental tests on the drivetrains as well as EMC tests on the C_Two. “With our many years of testing experience of electric vehicles and their components, we are delighted that IAV has chosen our test laboratories in Hartmannsdorf for this project too”, says SLG’s Managing Director Thomas Frank. “As an accredited testing institute and thanks to our local proximity to IAV, we can carry out the tests required for series production quickly and efficiently.”

The electromagnetic compatibility (EMC) tests ensure that the electronics installed in the vehicle do not interfere with radio systems or other vehicles and that they cannot be interfered with by them.
The various environmental tests ensure that the drives function reliably under all possible conditions, such as extreme climatic stresses, vibrations or driving in rainy conditions – and that the vehicle can qualify for series production.

Employing over 8,000 members of staff, IAV is one of the world’s leading engineering partners to the automotive industry. The company has been developing innovative concepts and technologies for future vehicles for over 35 years, generating sales in excess of € 1 billion in 2019. Its customers include all the world’s prominent car manufacturers and component suppliers. Besides vehicle and powertrain development, IAV entered the segment of electric mobility and autonomous driving at an early stage and is now one of the leading engineering service providers in these fields. In addition to its development centers in Berlin, Gifhorn and Chemnitz/Stollberg, IAV also has further operations in Munich, Sindelfingen and Ingolstadt as well as in Europe, Asia and North and South America.

Rimac Automobili was founded by Mate Rimac in Croatia in 2009 to develop the all-electric sports car of the 21st Century; a feat accomplished first in 2011 with the unveiling of the Concept_One and again in 2018 with the reveal of the 1914hp C_Two. Both vehicles are designed, engineered and manufactured in-house. From its headquarters on the outskirts of Zagreb, Croatia, Rimac has developed a range of high-perofrmance EV technologies: electric powertrain, battery solutions, infotainment and connectivity systems, autonomous driving software and many other key vehicle systems – unheard of for an independent manufacturer. In 10 years, the business had grown to more than 800 employees and had attracted major investment from Porsche and Hyundai Motor Group. Alongside development of its own range of hypercars, Rimac now supplies technologies to global automotive manufacturers: Aston Martin, Koenigsegg, Automobili Pininfarina, Porsche, Hyundai and others.

SLG Prüf- und Zertifizierungs GmbH, with approximately 180 employees, has been an independent and impartial comprehensive service provider for the examination and certification of products as well as for the certification of quality management and quality assurance systems for over 25 years. Its service portfolio includes tests for electrical and mechanical safety, electromagnetic compatibility, noise and vibration, serviceability as well as environmental and life cycle simulation. SLG tests a wide range of product groups, e.g. batteries and accumulators, products in the field of e-mobility and vehicle components, as well as household appliances and tools, and has over 20 accreditations and permits from superordinate bodies, e.g. DAkkS, IEC, ZLG, ZLS and KBA.