Trucks have to become much more climate-friendly. The combination of combustion engine and hydrogen can make an important contribution in this respect. By 2030, CO2 emissions from trucks with an overall weight exceeding 16 tons have to be cut by 30 percent. Combustion engines running on hydrogen can help to meet these requirements. Furthermore, they offer a similar mileage than diesel engine powertrains and can be ready for series production in time. IAV has analyzed this approach in detail and is therefore familiar with the opportunities and challenges of the H2 engine.

CO2 limits on passenger cars were imposed by the EU already years ago; since 2019, it is now clear that trucks with an overall weight exceeding 16 tons will soon have to reduce their carbon footprint as well. Emissions should fall by 15% by 2025 and again by the same amount by 2030, always referred to the status in 2019 and calculated with the tank-towheel consideration. Furthermore, the EU demands that two percent of the share in a truck fleet must be low-emission or zero-emission vehicles. As a result, the development of commercial vehicles will be dominated by technologies to avoid CO2 in the next years.

A number of technologies have the potential to make a contribution. Conventional diesel engines could fulfill the CO2 targets if operated with climate-neutral synthetic fuels. However, for this to have a positive impact on fleet consumption, legislators would have to introduce well-to-wheel balancing instead of the tank-to-wheel approach.

Batter y-powered electric trucks are named as the first alternative in current discussions. However, the energy density in the batteries is still so low that they would have to weigh several tons to keep a long-distance truck running. But this means less load, and therefore less turnover for the hauler. “Current battery technology is not suitable for long-distance commercial vehicles”, says Jörn Seebode, Senior Vice President for Commercial Vehicles at IAV. “They need batteries with roughly ten times the energy density.”

Hydrogen is another potential successor to diesel fuel, although discussions usually refer to using hydrogen in fuel cells. Fuel cells still face a few hurdles before they can be used in commercial vehicles: “Fuel cells currently still have a low specific power output. Given the situation at present, this would result in prohibitive costs because heavy trucks need several fuel cells. However, this could definitely be an alternative in the medium to long term”, says Marc Sens, Senior Vice President for Powertrain Advance Engineering at IAV. “Furthermore, fuel cells are very sensitive to impurities in the hydrogen. And at the moment, they also fail to comply with the demands of commercial vehicles in terms of durability.”

But hydrogen offers other possibilities apart from being converted to power for electric motors in fuel cells. It can also be used as fuel in a combustion engine in a process that is nearly free of emissions, because hydrogen burns without generating carbon-based pollutants. 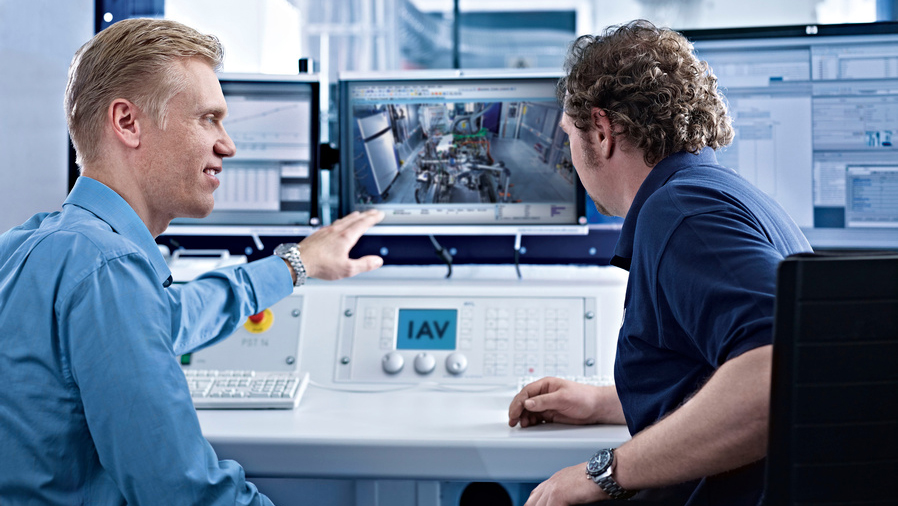 A few years ago, IAV was already involved in intensive development of turbocharged hydrogen combustion engines with direct injection and is therefore familiar with the technology. “We know the opportunities and challenges; moreover, we also know how to get a hydrogen combustion engine ready for SOP”, says Seebode. The opportunities are actually considerable: regenerative hydrogen is climate-neutral and would therefore be treated like an electric drive, i.e. with 0 grams CO2/km. What’s more, the right operating strategy could reduce NOx emissions practically to zero in a concept that might even manage without any exhaust aftertreatment system. “Trucks powered by a hydrogen combustion engine not only meet the CO2 limits but also comply with the zero- emission target”; explains Sens. “In other words, they would be allowed to run in conurbation areas in future.”

The technical challenges can be resolved. In principle, a hydrogen combustion engine is similar to a gasoline engine, with practically no differences even in compression ratio. Hydrogen burns efficiently even when highly diluted, thus allowing for a lean mixture and generating scarcely any NOx engine-out emissions. However, a lean-burn H2 drive needs a highly efficient supercharging system, other wise there won’t be sufficient energy density in the cylinder to generate appropriate specific power output. “Development work is still necessary here”, says Sens. “The supercharger needs to be more efficient with higher variability.”

Another challenge encountered in developing H2 combustion engines is the hydrogen injection system. Preferably, the hydrogen should be injected directly in the combustion engine cylinder on account of the power density and for safety reasons. However, no direct injection valves proven in volume production are available on the market at present. This is another area where IAV offers a wealth of expertise from many years of experience in developing injection systems for gaseous fuels.

The third challenge consists in the hydrogen storage/tank system, which must be capable of holding enough fuel in the smallest possible space. Low-temperature and pressure storage solutions are available here. Pressure storage solutions are used for passenger cars at pressures of up to 700 bar, but this is only feasible for relatively small tanks. As far as large tanks are concerned, the hydrogen would have to be cooled during refueling, resulting in high costs. Pressures of 350 or 500 bar would probably be preferable for commercial vehicles. Other possible alternatives would include technologies such as cryogenic storage systems or LOHC. Refueling takes only slightly longer than with diesel, with ranges suitable for long-distance operations.

But at the moment there are simply not enough hydrogen fuel stations: 75 are already in operation, with a target of 100 by 2020.

Initially it would suffice to expand the facilities available at HGV traffic nodes: in contrast to recharging a battery, refueling with hydrogen is much quicker so that far less infrastructure and space will be needed along the highways.

»The combination of combustion engine and hydrogen offers sufficient range for logistics operations, with high durability and low costs, and uses established technology«

Fit for purpose and ready for volume production by 2025

As of now, IAV has test facilities for hydrogen combustion engines at its Gifhorn Development Center.

“The combination of combustion engine and hydrogen offers sufficient range for logistics operations, with high durability and low costs, and uses established technology”, summarizes Seebode. “IAV therefore sees this as a very good way of helping the HGV sector to fulfill the CO2 targets. Furthermore, it is a solution that would be ready for volume production by 2025.” This depends on manufacturers reaching agreement on a standard tank technology and on using as many standard components as possible to reduce unit costs. I t would then be possible for hydrogen combustion engines to drive 28-ton, 25-ton and 40-ton trucks in just a few years.

Do you have any questions about our topic Commercial Vehicles & Work Machines?